Yancey died of cancer before he could take his seat. According to Ohio marriage records, he married Frances Leach on November 10, 1859 in Jackson County. He and Frances were listed on the 1860 census in Milton, Ohio, with Charles' occupation given as "Teamster."

"There were several negroes who occupied influential positions in the Republican ranks and throughout this period, chief among whom were J. H. Piles and C. A. Yancey. These two colored men were elected to the lower house of the legislature in November, 1869, where the former continued to serve until 1875. The latter died a short time after being elected. Both of them were Northern negroes, who came South for political gain. In delivering a eulogy on Yancey before the legislature in 1870, the future United States senator Revels said in part: 'Mr. Yancey, when at home, lived in Ohio.' This statement was taken up and quoted by Conservative newspapers in all parts of the State in ridicule of the negro-carpetbag administration."
(WPA history of Panola County) 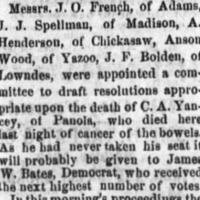 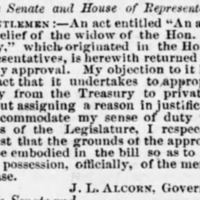