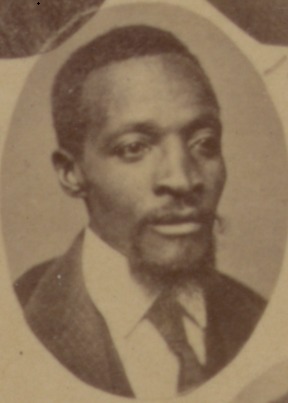 Shoemaker, minister and teacher. The following is an excerpt from the narrative of his daughter, Elnora “Ella” Harrison Gillespie, in Arkansas:

“My parents were Jane Bowen and Henry Harrison. Ma had seven children. They lived on the Gates place at freedom. I’m the onliest one of my kin living anywheres ’bout now. Ma never was sold but pa was.

Parson Caruthers brought pa from Alabama. He was a good runner and when he was little he throwd his hip outer j’int running races. Then Parson Caruthers learnt him a trade – a shoemaker. When he was still nothing but a lad he was sold for quite a sum of money. When emancipation come on he could read and write and make change.

So den he was out in the world cripple. He started teaching school. He had been a preacher, too, durin’ slavery. He preached and taught school. He was justice of the peace and representative for two terms from Chickasaw County in the state legislature. I heard them talk about that and when I started to school Mr. Suggs was the white man principal. Pa was one teacher and there was some more teachers. He was a teacher a long time. He was eighty odd and ma was sixty odd when she died. Both died in Mississippi.

My folks said Master Gates was good. I knowd my pa’s young Master Gates. Pa said he never got a whooping. They made a right smart of money outen his work. He said some of the boots he made brung high as twenty dollars. Pa had a good deal of Confederate bills as I recollects.”

Harrison is listed on the 1870 (misspelled Hinson) and 1880 census in Chickasaw County with wife Jane and children, and alone as a lodger on the 1900 census.