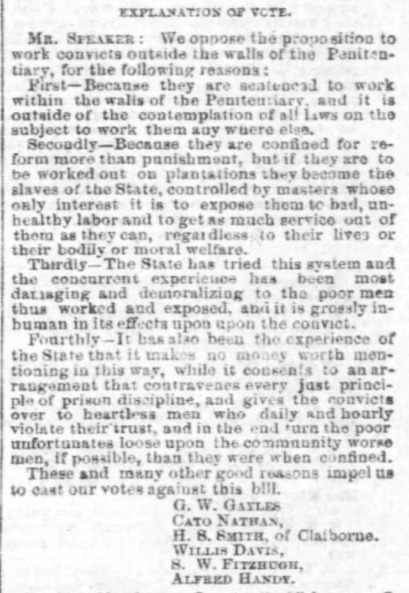 MR. SPEAKER: We oppose the proposition to work convicts outside the walls of the Penitentiary, for the following reasons:

First – Because they are sentenced to work within the walls of the Penitentiary, and it is outside of the contemplation of all laws on the subject to work them any where else.

Secondly – Because they are confined for reform more than punishment, but if they are to be worked out on plantations they become the slaves of the State, controlled by masters whose only interest it is to expose them to bad, unhealthy labor and to get as much service out of them as they can, regardless to their lives or their bodily or moral welfare.

Thirdly – The State has tried this system and the concurrent experience has been most damaging and demoralizing to the poor men thus worked and exposed, and it is grossly inhuman in its effects upon the convict.

Fourthly – It has also been the experience of the State that it makes no money worth mentioning in this way, while it consents to an arrangement that contravenes every just principle of prison discipline, and gives the convicts over to heartless men who daily and hourly violate their trust, and in the end turn the poor unfortunates loose upon the community worse men, if possible, than they were when confined.

These and many other good reasons impel us to cast our votes against this bill.