An order has been issued stating that no district organization or any citizen of a district is authorized to collect funds for the emancipation celebration unless by authority of the committee.

No book is genuine unless it contains the names of the committee on finance and is countersigned by the president and secretary. 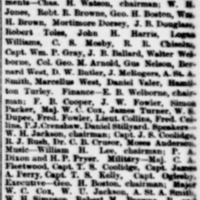