FROM THE CHAINS OF SLAVERY TO THE AMERICAN CONGRESS - A BRILLIANT RECORD.

To the Editor of The Inter-Ocean.

Inasmuch as the contested election case from the Sixth, "the shoestring district" of Mississippi, will doubtless command early attention from the next Congress, and again bring the Hon. John R. Lynch, of Natchez, prominently before the American people, a few facts concerning that, in many respects, very remarkable man, and his public career will, perhaps, not prove wholly uninteresting to the readers of The Inter Ocean.

Mr. Lynch, who is a mulatto, was born a slave, and his fetters fell when the triumph of the army of the Union gave vital force and effect to the revered and lamented President's proclamation of freedom. At the close of the war of the rebellion Mr. Lynch was unable either to read or write, but before the smoke of battle had been fairly driven away by the glad sunshine of peace, Mississippi was invaded by a band of Quaker teachers, and from these good missionaries he learned the alphabet. His appreciation of the duties and responsibilities of freedom inspired him with a laudable ambition, his never-to-be-satiated thirst for knowledge made the recent slave a diligent student, and, being possessed of rare natural abilities, he mastered the rudiments of an education with unusual facility.

ELECTED TO THE LEGISLATURE.

In the fall of 1869 Mr. Lynch was elected to represent the county of Adams in the Mississippi Legislature. Unlike too many of the colored race in those trying times, his head was not turned by the honor so suddenly conferred, nor was he in the slightest diverted from his steadfast purpose to fit himself for the highest and most honorable position to which an American citizen may aspire.

When not engaged in the performance of public duties, Mr. Lynch's constant and most loved companions were his books, and each day of the adjournment he was to be found in the State Library, or at his room, eagerly devouring the contents of some history or pondering over some volume of legal lore. He thus rapidly acquired knowledge and fitted himself to fulfill the obligations of the trust imposed in him, outstripping his frivolous companions.

On the death of Speaker Franklin, in 1870, Mr. Lynch was elected to fill the vacancy, and so well did he acquit himself that he was presented with a costly and elegant watch and chain by the members of the House, without regard to party, as a slight testimonial of their esteem and in appreciation of the very able, impartial, and courteous manner in which he had performed the delicate duty of presiding over that body. The presentation speech, which was highly eulogistic, was pronounced by Colonel H. M. Street, then, and now,

Concerning official integrity, the character of the ex-slave was never called in question, nor even sullied by suspicion. Indeed, the writer has many times, when legislative jobs were being discussed, heard the remark: "Well, there isn't money enough to buy John Lynch; you can count him as being right every time." Such a character and such a course of conduct was speedily recognized by the better element, and Mr. Lynch at once took rank among the foremost leaders of his party, and as a worthy representative of his race.

He subsequently served four years in Congress, where he acquired an enviable reputation as a sound thinker, an earnest, consistent, and liberal-minded Republican, and an able and forcible debater.

Mr. Lynch, who would have been, but for the introduction of the Mississippi plan of carrying elections, continued without interruption as the Representative of his district in Congress, will contest with General J. R. Chalmers for a seat in the next House. His claim is not, as has been the case in some contests heretofore made, that if Republicans had been permitted to vote without hindrance he would have been elected, but that he did receive a majority of the votes actually cast, and was, therefore, duly elected.

A sufficient number of votes to change the result were, however, thrown out in Warren County, and General

of election, but Mr. Lynch will show that he was unlawfully deprived of these votes, and that he is justly entitled to his seat. The Vicksburg Herald, the leading Democratic paper of the State, denounces the scheme resorted to deprive Lynch of his seat, and he has the sympathy and support of many fair-minded opponents, who realize the danger of countenancing such palpable fraud and shameless prostitution of the ballot-box. If the House performs its plain duty, the pretensions of General Chalmers will soon be disposed of, and Mr. Lynch, the rightful and authorized representative of his district, will be promptly admitted. He commands the respect of all classes, regardless of political considerations, and will continue a useful and honorable member of Congress. 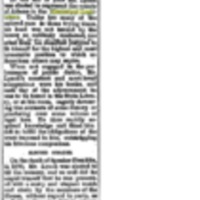