Rev. G. W. Gayles is one of the prominent representatives of his race in Mississippi. He was born in Wilkinson county, Miss., June 29, 1844. He is the son of Mr. Perry and Rebecca Gayles. His father was formerly of Maryland, and his mother of South Carolina. In 1859 he succeeded in learning his letters which were taught him by Miss Elizabeth Powell, of New York, who was at that time employed by Mrs. Nancy Barrow to teach her two daughters. In 1863 he went into the army and there he remained until the winter of 1864. Mr. Gayles seemed to have a natural love for reading the Bible and hymn books. He was baptized in October, 1866. On the 4th of Nov., 1867, he was called to an ecclesiastical council by Mt. Horeb Baptist Church, Greenville, Miss., which was conducted by Rev. M. B. Black as Moderator, Rev. Thomas Epps and others members of the Council and Brother J. F. Gilmore, Clerk. The Council being satisfied after the examination of Mr. Gayles, they publicly ordained him to the work of the ministry. Rev. G. W. Gayles then began his ministerial work in Bolivar county, Miss. The first church he organized was the Kindling Altar Baptist Church at Fast Fork, on the 11th of April, 1868, of which he is pastor until this day. On the 17th of September, 1869, he was appointed to the office of Member of the Board of Police for District No. 3, of Bolivar county, Miss., by Gov. Adelbert Ames. On the 2d of August, 1870 he was appointed Justice of the Peace for District No. 5 of Bolivar county, Miss., by Gov. J. L. Alcorn. On the 29th of August, 1870, he was appointed Supervisor for District No. 5, Bolivar county, Miss., and served until November, 1870. He was then elected as a member of the Mississippi Legislature and held that position four years. In July, 1872, he was appointed Missionary for the counties of Bolivar, Coahoma and Sunflower in Miss. He served until July, 1876. November, 1877, he was elected to the State Senate, of Mississippi, from the 28th Senatorial District, and was re-elected up to November, 1887. He held the office of Corresponding Secretary of the Baptist State Convention for three years and was a member of the Executive Board for eighteen years. In the month of July, 1876, he was elected President of the Baptist Missionary State Convention by acclamation, which position he has held ever since by re-election. Under his administration the Baptist State Convention has had great success. They have bought a printing press at a cost of $500, and established a college at Natchez, Miss., at a cost of $5,365. July, 1881, he was elected editor of the Baptist Signal, which position he held four years. 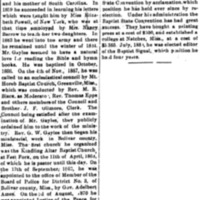