Historical marker for the Charles Caldwell assassination at the corner of Leake and Jefferson Streets in Clinton.

Text: "Charles Caldwell, Republican leader during Reconstruction, was assassinated outside Chilton's Store on the northeast corner of Leake and Jefferson Streets on December 30, 1875. Caldwell, a former slave, was a delegate to the 1868 State Constitutional Convention and in 1870 was elected to the state Senate. He organized the political rally that led to the Clinton Riot. A target of vigilantes, Caldwell was lured to the cellar of Chilton's store and killed in an ambush." 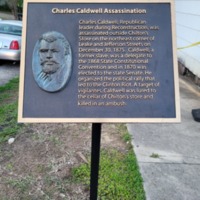