Text: "The George Bowles House at 13 St. Catherine (left) was one of several houses built on the hill after the 1886 demolition of the hospital. Partially visible is the Parsonage of Zion Chapel A.M.E. Church.

African American George F. Bowles moved to Natchez in 1871 and was admitted to the Mississippi Bar in 1875. He married Laura Davis, sister of local baker William Minor Davis.

Bowles was both a member of the school board and a city attorney during Reconstruction. He was elected to the Mississippi House of Representatives and served two terms from 1887 to 1891.

Bowles also served as Grand Chancellor of the Knights of Pythias, the fraternal organization that erected his tombstone in the Natchez City Cemetery at his death in 1899." 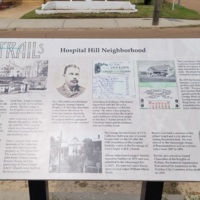